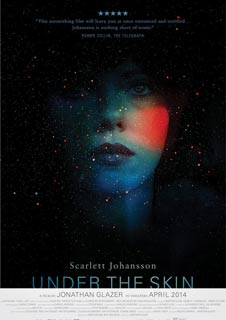 Visually and aurally audacious and as slippery in form as its central character, Jonathan Glazer’s (Sexy Beast, Birth) elliptical sci-fi about an alien creature (Scarlett Johansson) who stalks down human prey is a brilliant amalgam of fantasy and reality. In a stunning early sequence of metamorphosis, the naked femme fatale dons the attire of her predecessor and goes out on the prowl in a non-descript van, effortlessly procuring not-so gullible lads from the backstreets of Glasgow and local highways and luring them into an unimaginable void. Through alien eyes, the world appears desolate, the men all hungry and wanting. Filmed on location in Scotland, where not all the male victims were knowing participants, the filmmaking recalls the realism of Ken Loach as much as the surrealism of David Lynch. Glazer has created an entirely distinctive film, both creepy and luminous in its metaphysical precision.