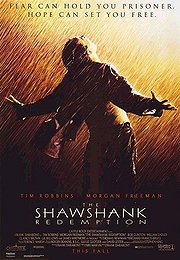 Nominated for seven Academy Awards including Best Film and Best Actor, this film is an extraordinary tale of hope, friendship and survival inside a maximum security prison. This new three disc tenth anniversary edition boasts many impressive new exclusive features. City Banker, Andy Dufresne, arrived at Shawshank Prison in 1947, convicted of two brutal murders, he received a double life sentence. He discovers that when they send you to Shawshank Prison for life…that’s exactly what they take. Within the confines of Shawshank, Andy forms an unlikely friendship with the prison “fixer” Red. He also becomes popular with the warden and the prison’s guards as he is able to use his banking experience to help the corrupt officials amass personal fortunes. With an extraordinary twist in the tale, Andy finds that survival comes down to a simple choice; get busy living or get busy dying.