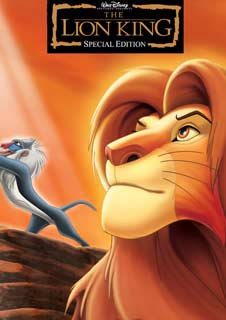 One of the most popular Disney animated musicals, The Lion King presents the story of a lion cub’s journey to adulthood and acceptance of his royal destiny. Simba (voiced first by Jonathan Taylor Thomas, then by Matthew Broderick) begins life as an honored prince, the son of the powerful King Mufasa (voiced by James Earl Jones). The cub’s happy childhood turns tragic when his evil uncle, Scar (voiced by Jeremy Irons), murders Mufasa and drives Simba away from the kingdom. In exile, the young lion befriends the comically bumbling pair of Pumbaa the warthog (voiced by Ernie Sabella) and Timon the meerkat (voiced by Nathan Lane), he and lives a carefree jungle life. As he approaches adulthood, however, he is visited by the spirit of his father, who instructs him to defeat the nefarious Scar and reclaim his rightful throne. Borrowing elements from Hamlet, classical mythology, and African folk tales, The Lion King tells its mythic coming-of-age tale with a combination of spectacular visuals and lively music, featuring light, rhythmic songs by Elton John and Tim Rice, and a score by Hans Zimmer.