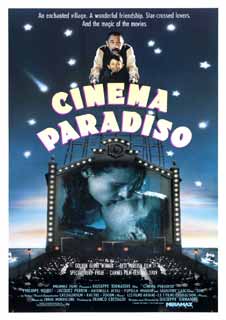 A filmmaker recalls his childhood, when he fell in love with the movies at his village’s theater and formed a deep friendship with the theater’s projectionist. Cinema Paradiso offers a nostalgic look at films and the effect they have on a young boy who grows up in and around the title village movie theater in this Italian comedy drama that is based on the life and times of screenwriter/director Giuseppe Tornatore. Featuring a lush soundtrack scored by Ennio Morricone, Cinema Paradiso is for anyone who loves the movies, and Tornatore’s final montage of glorious movie images reaffirms the power and magic of cinema.