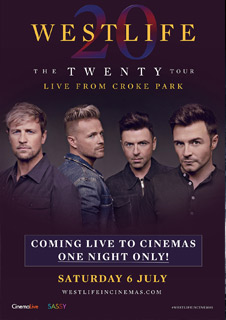 Westlife are back! It’s been 20 years since they smashed into the charts in 1999 with `Swear It Again’ and went on to achieve a staggering 14 number one UK singles, selling 55 million records worldwide. Now, their highly anticipated reunion tour – which sold out in minutes – is coming to cinemas worldwide on Saturday 6 July. The final spectacular show of the UK and Ireland leg of the `The Twenty Tour’ will be broadcast LIVE to cinemas from Dublin’s iconic Croke Park stadium. Irish heartthrobs Shane, Nicky, Mark and Kian will perform brand-new music alongside their greatest hits and all 14 of their UK No.1 singles, including `Uptown Girl’ `Flying Without Wings’, `You Raise Me Up’ and ’If I Let You Go’. For one unforgettable night, Westlife fans from coast to coast will raise the roof once more, in celebration of one of pop’s most sensational comebacks.